We hope you’re enjoying your weekend!  We have two brief, fairy tale-inspired stories for you today in response to our weekly prompt.

This week’s prompt was visual: 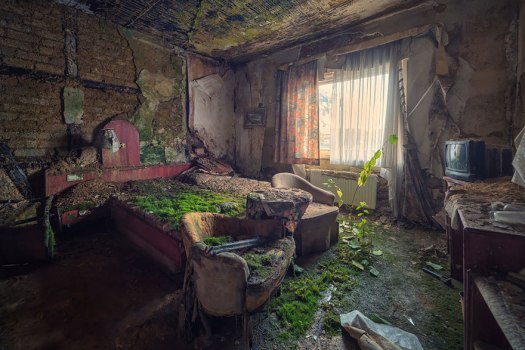 Karen Blakely has another piece featuring the heroine of her upcoming novel, Red.

When I first caught sight of the house, there were no visible signs of damage. I heaved a sigh of relief at the sight of shelter; the storm was nearly upon me. The first drops of rain had just started to fall. At least I had somewhere I could stay dry.

There was something oddly familiar about the house, but I was sure I’d never been there before. It was deep inside the woods, beyond my normal patrol area; in the no-man’s land between where I patrolled and Nick Ratchet’s assigned area.

I knocked, but there was no answer. Instead, the door creaked open under my hand.

I hesitated, not wanting to barge into someone’s house, but a clap of thunder, accompanied by an immediate bright flash of lightning — terrifyingly close — opened the clouds overhead. Rain fell in torrents, obscuring the trees crowding close around the house.

To hell with waiting. I ducked inside the small front room and realized my concern about it belonging to someone had been without cause. The room had probably been tidy once, but dust and spiders had definitely had their way with it. No one had been there for years.

On my right, a small old-fashioned kitchen had a hand-pump instead of a faucet in the sink, but next to it stood a modern refrigerator, looking very much out of place. There was nothing else of interest in that space except a scattering of dirt and…mouse droppings?

I turned to my left with a shudder, and was confronted by a plain wooden door. I inched toward it nervously as a strange sense of recognition fought with dread. I couldn’t bear to see what lay beyond that door, yet I had to know.

My legs moved stiffly, without any of my normal agility, and my hand froze on the doorknob. For a moment, the knob refused to turn.

I breathed deeply. Once. Twice. Then, feeling like I did when confronting a murderous shifter, I forced myself to slowly, cautiously, try once again to open the door. This time, the knob turned easily under my hand, and I pushed the door open.

My heart was pounding like I’d been chasing an angry bear through the woods. But there was nothing frightening in front of me.

This had, once upon a time, been a bedroom.

There was a small hole in the roof just behind the door. Water wept through it, adding to the moisture that had already collected in the room.

The floor was covered with moss. Moss grew in places on the walls where the wallpaper hadn’t peeled away. Moss coated the bed like a thick green bedspread. One previously beautiful tapestry armchair had fallen into a heap, and the seat was obscured by a thin coat of moss as well.

The matching armchair looked nearly whole, as did the curtains still hanging in the window.

Most of the furniture had fallen into varying states of disrepair and decay. All the organic materials in the room showed the effects of exposure to water and sun and spiders. But at the far end of the room, a startlingly clean glass and plastic television — the kind available in the 1990’s, with a heavy, boxy shape — perched on a table.

I turned to my left, eyes sweeping the space; still not sure what continued to rile up my emotions.

There, on a low dresser, I saw it.

The picture in the tarnished silver frame. A photograph of me, my mother, and my grandmother. The last picture we’d taken together.

My Grandmother had always come to visit Mom and me at our house in town. I hadn’t realized it until years later, but she’d never come over when Dad was home. There’d been bad blood between them, but I never knew what it was.

This picture had been taken when we celebrated my sixteenth birthday. Two days late. Grandmother had always managed to visit me on my birthday before then. For as long as I could remember she’d been there, bringing my favorite meatloaf — hers had always tasted so much better than anyone else’s.

But she never came to visit us during the full moon. Which was why we’d celebrated my birthday two days late that year. I’d been angry with her. I’d never questioned her refusal to visit during the full moon before. But sixteen was supposed to be a special birthday, after all. It didn’t seem like too much to ask that she visit on that day. I’d expected her to and said so, both hurt and angry. But I hadn’t been so angry that I didn’t notice the odd look that passed between her and my mother. I would have asked about it later, but by then everything had changed.

That’s why I’d recognized this place, even though I’d never been there. Grandmother had described it to me. Many times.

The place where my Grandmother had been murdered, ten years before.

Clearly much time had passed when she opened her eyes.  Nature had begun to reclaim her little cottage in the wood.  Moss thickly coated the walls and furniture and television set, plants had grown up through the floor.  It was always a consequence of retreating for a time.  The world fell apart around her, until she felt strengthened enough to return and pick up the pieces.  Or knew she had no choice.

There was no prince to wake her up, and that was just as well.  In these first, hesitant steps back into the light, she had no strength to handle another person’s needs and expectations.  He’d hurt her, unmeaning to, and she would hurt him, unable not to.  Better to let that adventure wait until she was more awake, until she was comfortable in her world again.

There had been no wicked fairy who put her to sleep either.  Just Sleeping Beauty, deciding she could no longer face the world and escaping into a dreamland.  Until the dreamland became too flat, too empty, and she knew she had to return to her own world now or not at all.

She stretched and sat up and surveyed the world around her.  Even this shadowed room seemed too bright, but she knew eventually she would adjust.  The thing to do was to start doing something.  Anything.  Perhaps scraping a bit of moss off the walls.  That might be a place to start.