We’re excited that one of our Stonehenge Circle Writers has a new book out this week!  Here’s all the information on Kelly Haworth’s Gotta Catch Her!  Catch your copy today 😉

Who says phone games are only for kids? Sometimes they give just the respite you need from a hectic life. At least, that’s the way Ann feels about Ani-min Move, an AR mobile game full of cartoon animals caught with nets. Legendary raids have just launched, and Ann arrives at a nearby park to find it full of people of all ages playing the game, including Rachael, a kind, attractive single mom. And sweet! Rachael is more than willing to teach Ann the proper way to spin her nets to snag the raid boss.

Back in reality, Ann has a lot on her plate: a full workload as a project manager, finding the energy to walk her dog, Franny, and now trying to figure out if Rachael is queer. And how does Ann converse with Rachael about her six-year-old son when she doesn’t know a thing about parenting?

Ann is lost as to how to proceed until Rachael takes the guesswork out of the equation by proclaiming she’s bi—right when Ann gets a massive work assignment that consumes way too much of her time. Life/work balance was never Ann’s forte, but between caring for her sweetheart dog and figuring out how to navigate a relationship with a single parent, Ann’s determined to make it work, especially before Rachael gets cold feet and leaves Ann playing by herself.

So, collect those ultra-nets, Ann. Can you catch her? 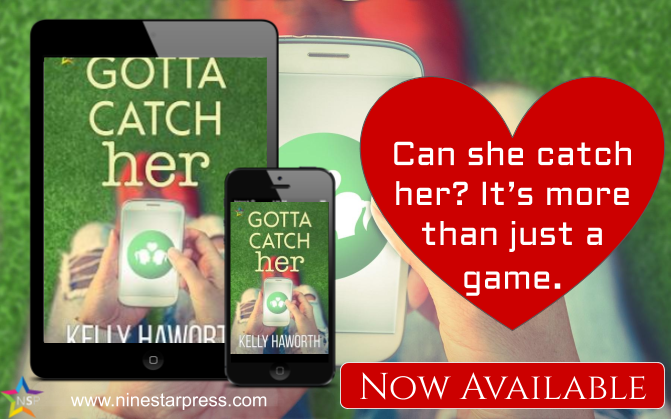 Kelly Haworth grew up in San Francisco and has been reading science fiction and fantasy classics since she was a kid. She has way too active an imagination, thus she channels it into writing. Kelly is nonbinary and pansexual and loves to write LGBTQIA characters into her work. In fact, she doesn’t know if she’ll ever be able to write a non-queer couple again. Kelly has degrees in both genetics and psychology and works as a project manager at a genetics lab. When not working or writing, she can be found wrangling her two kids, painting, or curled up on the couch with a good TV show or book.